The Film and Media Showcase is a forum for members of Cineworks, WIFTV and DOC BC that provides filmmakers with an opportunity to share their work with other artists, across genres and in a variety of lengths, in a space dedicated to discovery, discussion and inspiration. Each screening will be followed by a question and answer session with creators, with informal conversation and networking afterwards. 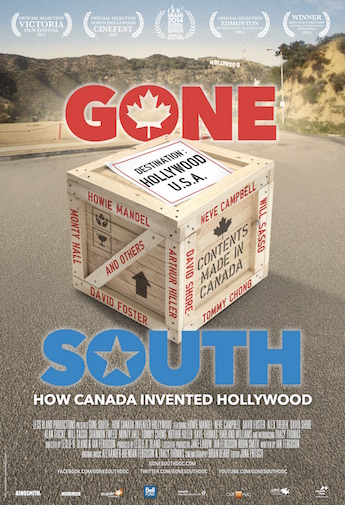 The feature length documentary Gone South: How Canada Invented Hollywood is a hilarious and investigative look at the long history and major influence Canadians have had on the development of American pop culture. It features exclusive celebrity interviews and classic archival images from the very beginnings of Hollywood right through to the present day.

Gone South presents an historical overview of the influence of Canadians in Hollywood – for example, three of the first four Oscar winners for best actress were Canadian, and so was Louis B. Mayer, who founded MGM studios; also Mack Sennett, who discovered Charlie Chaplin, created the Keystone Cops, and essentially invented comedy on film – as well as thematically linked interviews with current Canadians working in Hollywood. The whole point of the documentary is to present the argument that without the slow and subversive influence of Canada, Hollywood as it is known would not and could not exist. 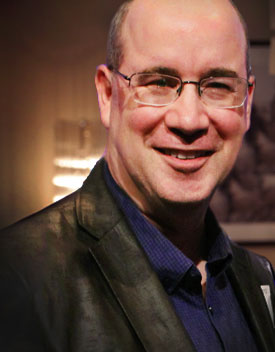 Leslie has produced, written, directed, and performed in over 150 professional projects in film, television, radio, and live theatre. Currently Leslie is the President of Less Bland Productions. He is currently producing and directing the documentary series The Wine Guys: Grape Escapes, and the sitcom series Ollie and Emma for Telus Optik. He has previously produced and directed the award-winning feature length documentary Gone South: How Canada Invented Hollywood featuring Howie Mandel, David Foster, Neve Campbell, David Shore, and Alex Trebek for theatrical release and broadcast on Super Channel, and the all female comedy series She Kills Me for APTN.

From 2001 – 2010, Leslie was the Artistic Director of Kaleidoscope Theatre in Victoria. He is also the co-founder and for 12 years was the Executive Producer of Edmonton’s Stage Polaris. An accomplished dramaturge and playwright, Leslie has had ten adaptations/plays produced professionally at theatre companies across Canada. He has also written a fantasy mystery book The Other Side of the Curtain.

Today she is wears the crown of Mrs. Universe, but the empirical rise to fame and acclaim for the young and beautiful Aboriginal Ashley Callingbull has been any thing by a smooth stroll down the catwalk. Ashley’s story is one of childhood struggle and lifelong healing that has paved the way to being an inspiration for today’s youth.
Ashley is the very definition of a role model.  After placing in the 2010 Miss Universe Canada competition, she landed a character on Gemini-award-wining Blackstone.   She does charitable work for youth globally and she uses her notoriety to tell her story of struggle and hope to inspire youth.   She has spoken at Harvard, Ted Talks and We Day all by the tender age of 23.

Ashley is not just a pretty face, she is using her role as the first Canadian and he first aboriginal person to hold the Mrs. America Title, to shine light on heavy issues affecting Canadian First Nations with the goal to help empower her people.