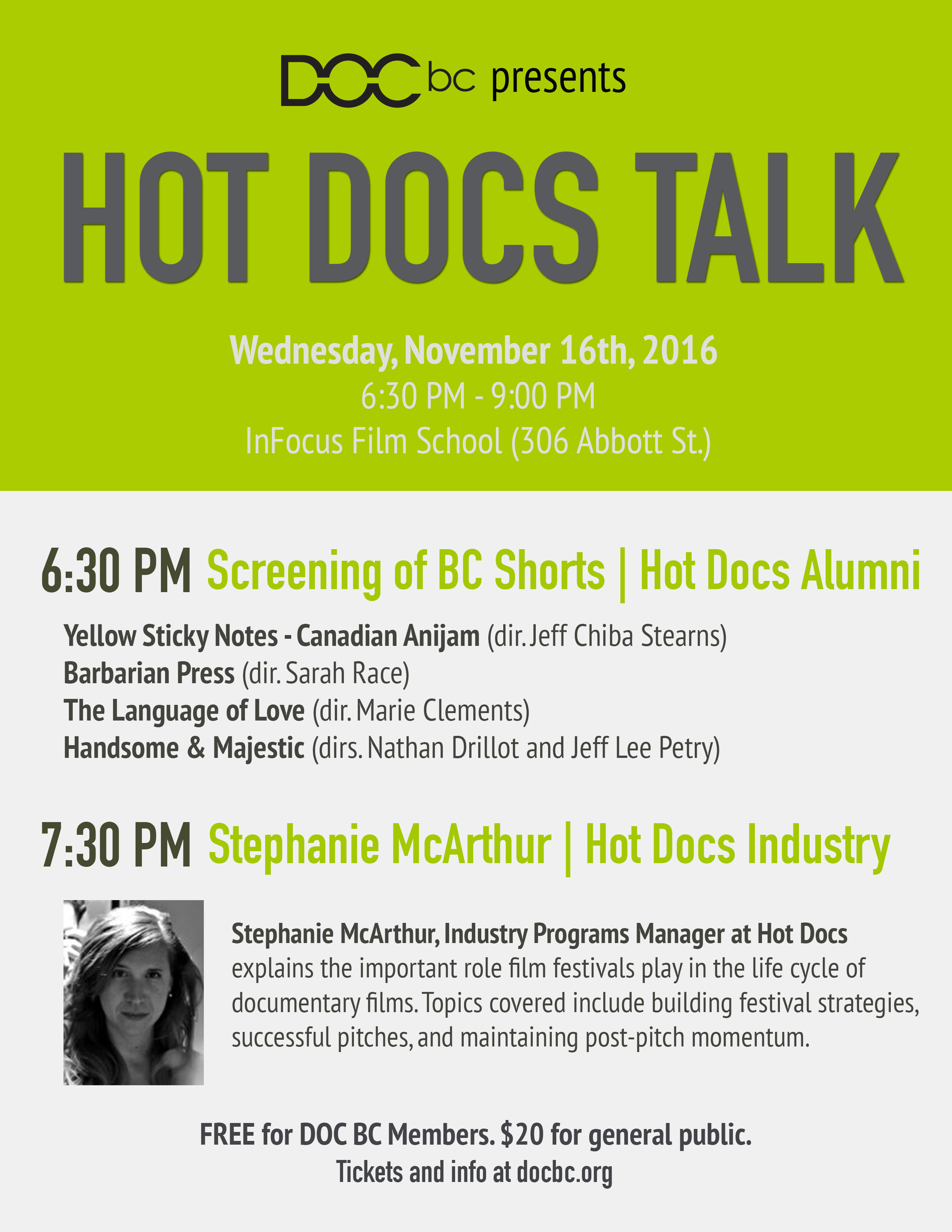 DOC BC is thrilled to announce a new event with Hot Docs Industry Programs Manager Stephanie McArthur. Join us on Wednesday, November 16th for a screening of BC short films followed by a talk with Stephanie McArthur about about the important role film festivals play in the life cycle of documentary films.

Barbarian Press (2016) | Director: Sarah Race
Barbarian Press is a documentary that tells the story of Jan and Crispin Elsted, who for over 35 years have made fine art books by letterpress. They live in Mission, BC Canada.

The Language of Love (2012) | Director: Marie Clements
The Language of Love is a short documentary featuring writer/actor/activist Stephen Lytton’s raw and poetic articulation of the thirteen years he endured in the residential school system- a child’s survival redefines itself as the artful embodiment of a man.

Handsome & Majestic (2016) | Directors: Nathan Drillot and Jeff Lee Petry
Handsome & Majestic follows the story of Milan Halikowski, a teenager from the rural city of Prince George, BC. As a recently transitioned transgender boy, Milan deals with discrimination and abuse from his peers and teachers at school, as he seeks to find other kids like himself. Throughout these hardships, he becomes a role model and an advocate for trans people in his small community and beyond.

What role can film festivals play in the life cycle of a documentary film? From development through distribution film festivals can offer support, connections and funding to get your films made. With a focus on understanding your audience and the marketplace this talk will show filmmakers of all levels how some early planning and research can get your film project off on the right foot. Tips will include building your festival strategy, successful pitching, and how to keep the momentum going post-pitch.

Stephanie curates the yearly programming strand Close Encounters of the Funding Kind and oversees the Emerging Producer Bursary Program for the World Congress of Science and Factual Producers. Previously she worked in Singapore as Associate Producer of the Asia Factual Forum (2007); was Head of Programming for the inaugural DocFest Stratford (2008); and served a four-year term on the Toronto Fringe Festival Best of the Fest jury beginning in 2007.